Wedding Horror Stories and how to avoid them !

What happened?
Sam Brooks says
Not really a horror story but we did our own balloons and they failed. We bought a tank of helium, weights, ribbons, and a special chemical called high float to keep the balloons going longer. We spent hours doing them late the night before, only for them to have deflated by early the next morning! They were supposed to last much longer. Luckily, a near buy party place stepped up and decorated our venue last min, but we wasted a ton of money on the balloons!

What would you recommend to stop to do avoid this happening?
What I would do differently is I should have just gone with the party place anyway! Then we could have kicked back and relaxed the night before, and there wouldn't have been a mad panic on the morning.

Married on 04/14/12 Nicki Tucker Upton says
I hired a photographer who was quite expensive and then she decided to change the contract on me because I never paid her a deposit! Also my reception wasn't even an hour long because my new sister-in-law was upset that people were leaving so she made everything back to back. The Intro, cake cutting, mom/son dance, .mom/daughter dance, Garter toss, Bouquet toss and last dance. One right after the other and when she announced the last dance she mentioned it was time to leave!!! And she rushed my photographer and wasn't even able to get the photos I was wanting.

How to prevent this from happening?
I would have hired someone else that cared more for what we wanted. Someone who cared whether there were people there to watch everything and let US have our perfect day! And I am still really upset about since. It is very important to talk to your photographer and make it clear what you want. Sign a contract and make sure you stick to it. The last thing you want is to end up paying extra money

Just Call Me Skittles says
Its actually my 3 year wedding anniversary today! so i was just talking about this. The planning was GREAT till 2 days before the wedding when i show up to the rehearsal dinner to see that the table linens didn't fit and get a call from the florist to find out the lilies aren't fully in bloom yet and the dance floor was put in the wrong spot so i had to pay an extra $90 to have them come and move it to where it should have been! Oh and then wedding day although perfect to me, was pretty windy so the Huppah didn't want to stay up right and my veil was flailing everywhere and then right after the ceremony the photographer broke his flash! so I don't have any professional photos of the reception and all the wedding family photos we were all squinting cause we had to stand in the sun hahaha. O WELL that's life! and I got to marry my wonderful husband and best friend.

Ashley Dare says
I married a wonderful military man. On our wedding day, his 4 best friends flew in from out of town. The airport is a little over an hour away, and add they got to our house, realized they left their tuxedos (they were IN the wedding) at th...e airport . We had to send a friend to pick it up. As the evening went on and the reception ended, one if the pity if town groomsmen decided to help himself to the use of our Cadillac escalade. Ten minutes later he calls to say he totaled it. my husband and I arrived on scene in time to witness him being read his rights. The next morning, I have to go post $500 bail to get him out. Needless to say, its a day we won't forget for many reasons!!!!!!!! 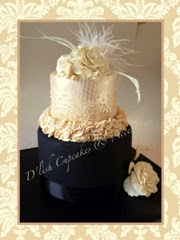